At the end of another challenging year, we’d like to say a big THANK YOU to all of our researchers for your continuing support and connection to the Industry Documents Library.

From all of us at the IDL, we wish you a safe and festive holiday season, and a healthy and hopeful New Year ahead.
Kate, Rachel, Rebecca and Sven
Wednesday, March 24, 2021

The University of California, San Francisco (UCSF) and Johns Hopkins University announced the launch of the Opioid Industry Documents Archive, a digital repository of publicly disclosed documents from recent judgments, settlements, and ongoing lawsuits concerning the opioid crisis. The documents come from government litigation against pharmaceutical companies, including opioid manufacturers and distributors related to their contributions to the deadly epidemic, as well as litigation taking place in federal court on behalf of thousands of cities and counties in the United States. The documents in the archive include emails, memos, presentations, sales reports, budgets, audit reports, Drug Enforcement Administration briefings, meeting agendas and minutes, expert witness reports, and depositions of drug company executives.

The Opioid Industry Documents Archive leverages extraordinary expertise within UCSF and Johns Hopkins University in library science, information technology, and digital archiving. It also relies on scholarship focused on many dimensions of the opioid epidemic, ranging from the history of medicine to pharmaceutical policy to clinical care. Key organizations at UCSF involved include the Philip R. Lee Institute for Health Policy Studies; Department of Clinical Pharmacy; Department of Humanities and Social Sciences; Department of Family and Community Medicine; and Library. From Johns Hopkins University, the project involves the Bloomberg School of Public Health’s Center for Drug Safety and Effectiveness; Welch Medical Library; Institute of the History of Medicine; and Sheridan Libraries’ Digital Research and Curation Center.

The new archive will provide free public access to anyone who is interested in investigating the activities that have led to the devastating epidemic, which has now contributed to the deaths of nearly 500,000 people. The archive will promptly include new documents as they become available through resolution of legal action against companies that contributed to the deadly opioid crisis. The launch coincides with the universities’ efforts to house more than 250,000 documents produced by opioid manufacturer Insys in the course of its bankruptcy proceedings following opioid litigation.

The archive is similar to the groundbreaking Truth Tobacco Industry Documents archive at UCSF, which has fostered scientific and public health discoveries shaping tobacco policy in the U.S. and around the world. This new archive from two top research universities will deliver a wealth of information that experts can analyze to help policymakers prevent another disaster like this from happening again.

To learn more, read the full press release or contact us.
Thursday, June 27, 2019 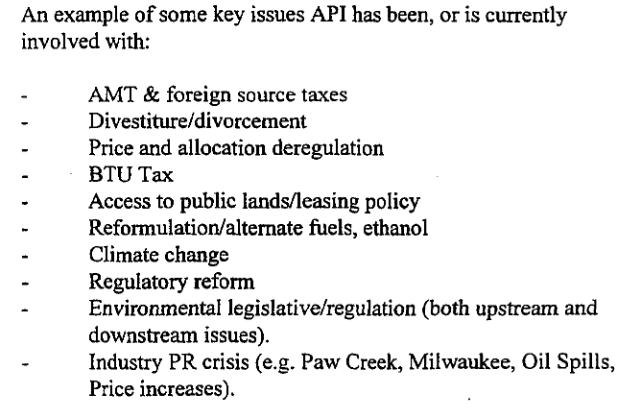 Excerpt from the February 4, 1997 recruiting letter from Ronald H. Walker, Managing Director of the API to Samuel D. Chilcote, Jr., President of the Tobacco Institute. Just as the tobacco industry promoted smoking not as a threat to public health but rather a “personal choice,” this same refrain is now being used by the fossil fuel industry urging people to make lifestyle choices as the solution to climate change. Such industry-sponsored “solutions” shift the blame from the industry to consumers. In the health literature, this public relations move is called “responsibilization,” as it deliberately aims to exculpate the industry from responsibility and delays effective supply-side interventions. These documents also highlight the relationships between industry and government and the conflicts of interest that develop when government and industry are intertwined. One notices, for example, a persistent revolving door between government and the fossil fuel industry, of which ExxonMobil CEO Rex Tillerson’s brief tenure as the US Secretary of State is but one instance. These documents provide insight into how and why industry decisions get made not because of but despite science. While the documents are US focused, the patterns revealed are often applicable globally, because most large oil and gas companies operate internationally. The documents offered here are the raw materials of history. Publishing them, interpreting them, and learning about their implications is the basic task of historians, essential for understanding how we came to our present state of affairs. However, these documents can also serve a political, scientific, and moral purpose: helping to make people aware of the long and complex history of industry disinformation and malfeasance, and, at least in part, innoculate the public against further disinformation. As we increasingly face the costs of climate change, they can also provide documentary evidence for legal action. The Fossil Fuel Industry documents have been made possible by seed funding from the Center for Tobacco Control Research and Education, and the Samuel Lawrence Foundation. Donors either of documents or funds to make the history of the Anthropocene available to the public are invited to make contact here. References 1 Juliana v. United States, 217 F. Supp. 3d 1224, 1250 (2016). 2 Oreskes, N., Conway, E.M., 2011. Merchants of Doubt: How a Handful of Scientists Obscured the Truth on Issues from Tobacco Smoke to Global Warming, Reprint edition. ed. Bloomsbury Press; Michaels, D., 2008. Doubt is their Product: How Industry’s Assault on Science Threatens Your Health. Oxford University Press, New York; Proctor, R.N., 2012. Golden Holocaust: Origins of the Cigarette Catastrophe and the Case for Abolition, University of California Press, Berkeley; Brandt, A., 2009. The Cigarette Century: The Rise, Fall, and Deadly Persistence of the Product That Defined America, Basic Books: New York.
Monday, June 24, 2019

More than 1,000 internal documents from the fossil fuel industry illustrating strategies to cast doubt on climate science and delay policy action are now available for public research in UCSF's Industry Documents Library. The documents, which were collected over two decades by the Climate Investigations Center, include internal memos, reports, correspondence and scientific studies from major fossil fuel corporations and related organizations which detail the industry's research and reaction to anthropogenic climate change beginning in the 1950s to the present. "This inaugural Fossil Fuel Industry documents collection marks the beginning of what we hope will grow into a comprehensive living archive to aid us in making sense of drivers of climate change and its unprecedented long-term threats to human and environmental health," says Dr. Yogi Hendlin, Research Associate with the UCSF Environmental Health Initiative, Assistant Professor at the Erasmus School of Philosophy and Core Faculty for the Dynamics of Inclusive Prosperity Initiative at Erasmus University, Rotterdam. The documents will be preserved for long-term public access and can be searched alongside the Industry Documents Library's existing collections of 15 million documents from the tobacco, drug, chemical, and food industries, allowing users to examine information related to industry-funded scientific research, marketing and public relations strategies, and influence on policies and regulations affecting public health. The library collects internal documents made available through public document disclosure in litigation, public records requests, archival files, and research investigation. IDL worked with the Climate Investigations Center to preserve and provide access to the documents collected for the Center's online ClimateFiles database. "This partnership with UCSF elevates our ClimateFiles project to the next level," says Climate Investigations Center Director Kert Davies. "With the Industry Documents Library's state of the art search engine and unrivaled archival skills, expert researchers from far and wide will now be able to dig into these documents we have been gathering for some 25 years." The Industry Documents Library was created at the University of California, San Francisco in 2002 to house millions of pages of documents produced during litigation against the tobacco industry in the 1990s. Evidence found in the documents was used by dozens of state Attorneys General to hold tobacco companies accountable for the public health crisis caused by smoking, and to negotiate the Master Settlement Agreement in 1998. More than seven million visitors have accessed the Truth Tobacco Industry Documents since they were made publicly available by the UCSF Library, and the collections have been instrumental in furthering tobacco control research and education for over a generation. The Industry Documents Library has expanded to include documents from the drug, chemical, food, and now fossil fuel industries to preserve open access to this information and to support research on the commercial determinants of public health. A variety of online research tools are available for navigating the collections, including full-text searching, a detailed bibliography, and access to the API for building and analyzing large data sets. The Library is committed to preserving and providing long-term public access to industry documents for the benefit of scientists, community advocates, journalists, policymakers, attorneys, and others engaged in improving and protecting the public’s health. For further information or to contribute documents please contact UCSF Industry Documents Library staff at https://www.industrydocuments.ucsf.edu/help/ask-us/ or @industrydocs.
PREV
NEXT